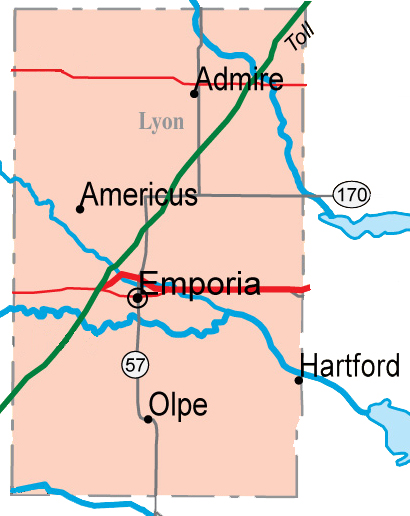 Lyon County is located in east central Kansas on the edge of the Flint Hills and the Osage Cuestas. Most birders know of Lyon County because of the Lyon County State Fishing Lake and the grasslands just south of the state lake that are fairly reliable for Smith's Longspurs. But Lyon County has many miles of roads that go through some excellent habitat and a day spent wandering the backroads of Lyon County can generate a very respectable bird list.

Lyon State Fishing Lake - Lyon SFL is located just north of K-170 highway on Road T. The lake is pretty good for waterfowl, specifically divers which can be hard to come by in the rest of the county. There is some pretty dense mature cedar forests on both sides of the lake, making for good woodland birding particularly in the winter. The area on the south side is a well known location for roosting Long-eared Owls in the winter. The field at the northwest intersection of K-170 and Rd T is a popular spot to try to flush up overwintering Smith’s Longspurs, sometimes more than 100 individuals. The roads surrounding the lake can also be very good for grassland sparrows.

Flint Hills National Wildlife Refuge - This refuge is located mostly in Coffey County, but a small portion known as the Burgess Marsh extends into Lyon County. Found just north of Hartford off K-130 (the county line), it has a few parking lots and a few short trails. The southern part is a relatively dense woodland area, a pretty reliable location for Pileated Woodpeckers and other mature forest species. The northern portion is a wetlands area that can be good for waders, waterfowl, and shorebirds, depending on current water levels. It is also a pretty nice area for sparrows.

Backroads - Lyon County has some pretty excellent prairie habitat, particularly the area to the northeast of Emporia. Road X south from K-170 often produces species such as Upland Sandpipers and Greater Prairie-Chickens, as well as a host of other grassland birds.

Water Treatment Ponds (WTP’s) - Neosho Rapids has a few sewage ponds located south of K-130 just south of the town, easily checked fro the road. Reading has some large and often very popular sewage ponds on the east side of town just north of the main road. One just pull off on the side of the road and walk to the fence to view these, but they typically have good numbers of waterfowl in migration.

Back to home page